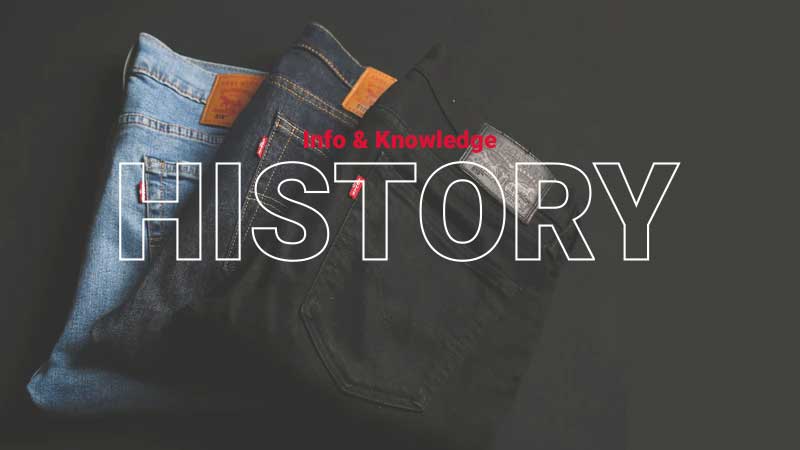 Two things that is so American, one is coca cola and another is jeans.  Jeans is undeniably the most popular outfit of our time.  So how did it all start?  First thing first, jeans was not an invention of America, but credit definitely goes to America for popularizing it.

Research on the trade of jean fabric shows that it emerged in the cities of Genoa, Italy, and Nîmes, France. Gênes, the French word for Genoa, may be the origin of the word “jeans”.  In Nîmes, weavers tried to reproduce jean fabric but instead developed a similar twill fabric that became known as denim, from de Nîmes, meaning “from Nîmes”.  The Genoese navy equipped its sailors with jeans, as they needed a fabric which could be worn wet or dry.  By the 17th century, jean was a crucial textile for working-class people in Northern Italy.

Levi Strauss, as a young man in 1851, went from Germany to New York to join his older brothers who ran a goods store. In 1853, he moved to San Francisco to open his own dry goods business. Jacob Davis was a tailor who often bought bolts of cloth from the Levi Strauss & Co. wholesale house. In 1872, Davis wrote to Strauss asking to partner with him to patent and sell clothing reinforced with rivets.  The copper rivets were to reinforce the points of stress, such as pocket corners and at the bottom of the button fly. Levi accepted Davis’s offer, and the two men received US patent No. 139,121 for an “Improvement in Fastening Pocket-Openings” on May 20, 1873.

Initially, Levi’s jeans were simply sturdy trousers worn by factory workers, miners, farmers, and cattlemen throughout the North American West. During this period, men’s jeans had the fly down the front, whereas women’s jeans had the fly down the left side. When Levi Strauss & Co. patented the modern, mass-produced prototype in the year 1873, there were two pockets in the front and one on the back with copper rivets. Later, the jeans were redesigned to today’s industry standard of five pockets including a little watch pocket and copper rivets.

During World War II, US soldiers introduced jeans to the world, by wearing them off duty.

After James Dean popularized them in the movie Rebel Without a Cause, wearing jeans became a symbol of youth rebellion during the 1950s. During the 1960s the wearing of jeans became more acceptable, and by the 1970s, it had become general fashion in the United States for casual wear.

Also, during 50s, teenagers embraced blue jeans, when Hollywood movies used jeans as a fashionable symbol of rebellion against the status quo. Pop culture “bad boys” such as James Dean and Marlon Brando popularized jeans in their films, wearing denim as they shook up the squares.

The 1960s launched the beginning of the hippie age. The youthful, free love movement that rocked American culture embraced the casual blue jean, which was seen to represent freedom from more structured clothing.  Embroidery, bright colors, stone washing, rhinestones , and patches were just some of the hip jean trends of the time. Popular cuts included bell bottom flares and low-rise hip huggers. Double denim also made its first real appearance as a fashion trend during the 1960s, and jean jackets became standard hippie wear, and were often decorated with sew-on decals.

In the early 1980s, the denim industry introduced the stone-washing technique developed by GWG also known as “Great Western Garment Co.” which helped to bring denim to a larger and more versatile market.

Same time around, Calvin Klein brought denim to the forefront of every fashion designer’s mind. Designer jeans became a true status symbol in popular culture, and brands including Calvin Klein, Jordache, and Gloria Vanderbilt were among the most coveted by fashion girls and guys.  Stone wash, acid wash, and ripped jeans were some of the most desired looks of this decade, along with the new, skinnier leg cuts that were tapered at the ankle. Even men got in on the designer denim trend in this decade, and started to show up more in jeans advertising.

Likewise, with more cultural evolution, there came baggy jeans, skinny jeans, higher waists, cropped legs, and what not all.

and here we are.  Jeans is love, jeans is life.

Has it ever occurred to you anything like this?

1. You joined a guitar class and after somedays, you felt like you soon will be playing as good as your friend who has been playing for many years; Looked like it’s not that hard as you thought. You played some simple riffs and you felt like playing like a pro.

2. You joined a driving class and after learning bit, you felt like you are all good to drive in highway like every body else.

4. You joined a medical college (or computer) and after few classes you felt like you now know so much about the subject.

5. Somebody was playing video game and you watched for a while and you be like, “Khai khai, la buje maile..now i can do it.”

Have you gone through such confidence just in the initial phase of learning process itself?

And as you get deep in, it must have occurred to you as well

2. You crashed your vehicle or failed your license exam.

3. This book is not what I thought.

4. It’s much complicated and deep.

If you had gone through any of such phenomenon or something similar to that, you have experienced Dunning-Kruger effect. In simple term, “those with less knowledge tend to be over confident”

Our brain is weird with too many flaws and this is one of our cognitive biases that creates an illusion of knowing when you actually have barely learned anything that as you keep learning, you will realise there is so much to learn and thus your confidence level goes down, until you gain enough experience and become experts.

Like shown in the image, those who have just started to learn tend to have higher confidence but gradually graph goes down as learning process picks up and it hits the bottom and then will curve back to upward graph.

It’s important to understand this because this will help you develop intellectual humility and not look like stupid to others.

People with paranoia may feel that others are plotting against them or trying to cause them physical or emotional harm, and maybe even stealing from them. They may be unable to work with others and can be hostile or detached, leading to isolation.

Paranoia is a thought process that causes you to have an irrational suspicion or mistrust of others. People with paranoia may feel like they’re being persecuted or that someone is out to get them. They may feel the threat of physical harm even if they aren’t in danger. People with dementia sometimes have paranoia, and it also can occur in people who abuse drugs. Paranoid thoughts can also be a symptom of a mental illness or a personality disorder.

Note:  Paranoia is distinct from phobias, which also involve irrational fear, but usually no blame.

Mistrust of others and constant anxiety can make relationships and interactions with others difficult, causing problems with employment and personal relationships. People with paranoia may feel that others are plotting against them or trying to cause them physical or emotional harm, and maybe even stealing from them. They may be unable to work with others and can be hostile or detached, leading to isolation.

Nepal Sambat (नेपाल सम्बत) is a lunar calendar and the official calendar of Nepal for over 1000 years. Nepal Sambat is almost identical to and is a variant of “Saka Sambat”, a Hindu calendar, but the main difference is that Nepal Sambat lags Saka Sambat by 802 years.

Nepal Sambat consists of 354 days per year due to the fact that a lunar month has 29 or 30 days based on the movement of the moon. So it necessary that an “adhik mas”, an extra month, every third year (Just like what we had this past year). This calendar came into official use during the reign of Thaku-Juju (Thakuri) King Raghav Deva since October 880 A.D.

According to a popular legend, there used to be a learned person in Bhaktapur who ordered porters to get sand from Lakhu Tirtha, junction near Vishnumati river in Kathmandu because he knew that the sand would turn into a heap of gold the next day. Shankhadhar Sakhwaa who is described in later chronicles as a Shudra (lower-caste) merchant came to know about it, and he enticed the porters to leave the sand in his place. The next day, the sand turned into gold. Then, with the permission of the king, he paid off the existing debt of all the people in the Kathmandu Valley. So from that day, people started celebrating it as their New Year to commemorate their happiness and new found freedom.

“Hong Kong will now be treated the same as mainland China,” Mr Trump

Things to know before buying a Soft Contact Lens